Showing posts from May, 2019
Show All

May 30, 2019
The sharp and persistent decline of international capital flows in its aftermath has been interpreted by some observers as proof of financial ’deglobalization’, reflected in particular in a generalized contraction of cross-border bank lending in response to regulatory and other policy changes (Forbes (2014), Rose and Wieladek (2014), Van Rijckeghem and Weder di Mauro (2014), Forbes et al. (2017)). However, other papers argue that such view is not supported by more appropriate measures of banking globalization, such as the interconnectedness of the banking network (Cerutti and Zhou (2017)), or nationality-based (as opposed to location-based) measures of cross-border banking activity (McCauley et al. (2017)). Our factor model framework allows us to shed light on this debate, as the aforementioned exposure of cross-border flows to common shocks provides a natural measure of the overall degree of financial globalization.

Pavel Rejf on Huawei and deglobalization

Europe in Times of Deglobalization 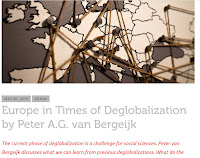 The very existence of the European Union is a fundamental difference to the 1930s when the European continent was fragmented, confrontational and bellicose. While Europe is missing the military might that is often seen as a necessary condition for world leadership, there could be a possible scenario in which the European Continent has to act as the hegemon of last resort.

Erin Kelly on the costs of deglobalization 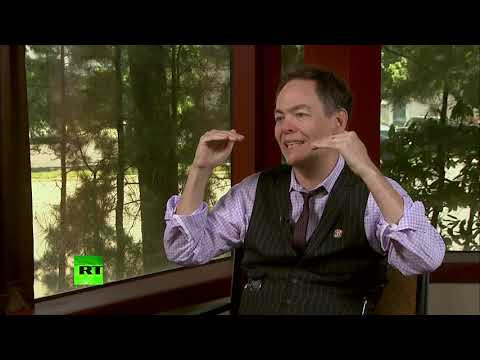 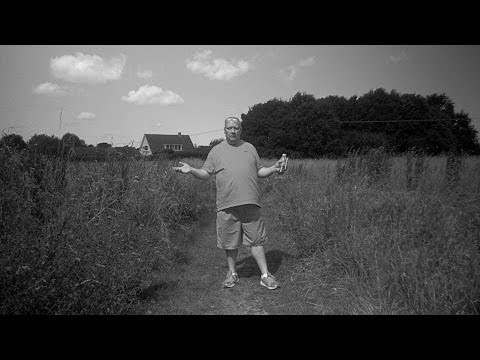 and an insightful review on zeroantropology

May 26, 2019
As many countries are now seeking to protect their own markets rather than indulge in global trade, this paper examines whether this type of de-globalization behavior has been having any effect on international investment relationships through a systematic analysis of international investment network (IIN) in 127 economies from 2005 to 2016. Unlike previous studies that only analyzed portfolio investment data, the bilateral international investment data were estimated using a matrix-based iteration approach, and the IIN established using complex network theory. Using bilateral international investment data made the results more reliable and somewhat closer to reality. To analyze the structural properties and evolution of the IIN, complex network indicators including a new one named node similarity were developed. The node similarity is defined as the proportion of common relationships of the current economy between two successive years which is useful to reveal the dynamics of the IIN…
Post a Comment
Read more

May 26, 2019
The paradigm of deglobalization was advanced as an alternative paradigm by Focus on the Global South (Focus) in 2000, at a time that corporate-driven globalization appeared to be irresistible.
It has had an interesting history since then. Deglobalization first attracted attention and provoked discussion in progressive circles. It was only after the 2008 financial implosion that it attracted attention from the mainstream, with The Economist writing that with the “integration of the world economy in retreat on almost every front,” the economic meltdown “has popularized a new term: deglobalization.”
Nearly 20 years after “deglobalization” was first introduced  by Focus, one of its main authors, Walden Bello,  looks back at its strengths and weaknesses, and how its interaction with other alternative frameworks can be a mutually enriching exercise.
The main paper includes an annex, Deglobalization Applied: A Post Neoliberal Paradigm for Myanmar, which outlines concrete application of the p…
Post a Comment
Read more

Borders and walls as the new manifestation of deglobalization

May 26, 2019
Ultimately, all roads lead back to the border, that ground zero of non-relation and denial of the very idea of a shared humanity, of one planet – the only one we have – that we all share and to which we are all bound by our shared itinerant condition. But perhaps, for the sake of accuracy, we should talk of ‘borderization’ rather than borders.

May 26, 2019
Right-wing populism can be found right across Europe. Today, every third European government consists of or depends on a populist party. Right-wing populism has gained high levels of support among rural population in Europe. How could this happen and what are the solutions? Natalia Mamonova, of the Emancipatory Rural Politics Initiative, explains the causes of populism in the European countryside and shares some ideas on potential resistance and the building of alternatives to the regressive nationalist politics. 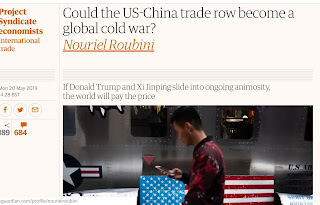 Read about this here (The return of the cold trade war)and here (Could the US-China trade row become a global cold war? by
Nouriel Roubini 2019)
Post a Comment
Read more

Make Internationalism Great Again: The AIB in an Age of Populist Nationalism

May 24, 2019
Most AIB members would agree that international economic, social, cultural, and political cooperation can contribute to a better world and that cross-border exchanges should be encouraged. At this point, however, that sentiment is far from universal: the very values and mission of the AIB are under attack in many of our countries from economic nationalists such as Trump in the United States, BREXIT supporters in Britain, Orban in Hungary, and most recently, Bolsonaro in Brazil.

is globalization an inevitable state or could it unravel

May 24, 2019
In the lead article, Kobrin poses a series of questions generated by recent anti- and deglobalization trends. He wonders whether globalization is an inevitable state or could unravel, and also whether a global system could be constructed that both promotes economic integration and all of the benefits it generates, while acknowledging the need for national sovereignty and independence, and preserving the rights of nation-states to oversee important aspects of their domestic economic destiny. Regarding the first question, he contends that such a system is not inevitable: a strong economy must take the lead to create a dynamic system of trade that will benefit the broadest group of nations and their stakeholders. He contends that leaders of the strongest of economies must move beyond a mercantile mindset and shorter-term, zero sum assessments of economic gain by recognizing longer-term benefits of trade on economic stability and peace. Following Rodrik, Stiglitz, and others, Kobrin obser…
Post a Comment
Read more

May 23, 2019
"This pervasive economic and political deglobalization is unprecedented (...) It seems as if globalization may have reached its peak, a peak that not long ago seemed in the far distance by the wealth gains of trading goods around the world and the ease of travels for many"
Gerard Reese, , Amir Rosenmann, and James E. Cameron. The Psychology of Globalization: Identity, Ideology, and Action. Academic Press, 2019., pp. 210-211
Post a Comment
Read more

We are in the midst of a deglobalisation wave of which Trumpism and Brexit are mere symptoms. Deglobalisation can be recognised in almost all countries and at the global level. How has deglobalisation occurred in the past and in this day and age? Professor of International Economic Relations and Macroeconomics Peter van Bergeijk analyses the concept of deglobalisation in this pre-publication of his book 'Deglobalization 2.0: trade and openness during the Great Depression and the Great Recession' on internationale spectator (clingendael institute)
Post a Comment
Read more

The spectre of deglobalization and the European elections

May 08, 2019
A decade after the first crisis of 21st century capitalism, Europe has passed the nadir of the aftershocks unleashed by the 2008 global downturn. It is time to count blessings: a rerun of the Great Depression has been avoided and growth returned to the besieged continent. Whether the upswing will continue in 2019 is doubtful as dark clouds hover on the horizon. The spectre of deglobalization looming over trade tensions between the United States (US) and China, the uncertain fallout from Brexit, Hungarian, Polish and Romanian backsliding on the rule of law, and the rise of populism across the continent confront the European Union (EU) with an existential crisis.

May 03, 2019
Thus, we can conclude that the gravediggers of globalization, raging world. Enemies of a project that, for its low acceptance in society, we could consider a failure. In the coming years, could be predicted a weakening of the supranational structures-UN , NATO, etc-, which will lead to an increase in political tensions and a greater tension in the international board. 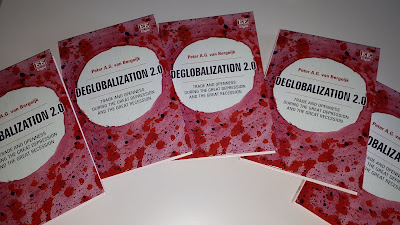