unpacking the possibility of deglobalisation

January 30, 2018
Finbarr Livesey argues that he interpretation of the global economy has been framed as an inevitable journey towards ever greater integration—a story of hyper-globalisation. This article discusses the nature of manufacturing to understand whether this interpretation holds and to investigate the possibility of deglobalisation at the level of physical goods trade in the coming decades, and what that may imply for other non-physical elements of globalisation.

In a world roiled by populist sentiments and anti-immigrant tendencies, the world’s well-trodden migration corridors, which follow remittance corridors one to one, are under strain. It would seem fitting (if tragic), that a world hellbent on retrenchment and deglobalization, is not only raising barriers to entry to the more than 260 million economic migrants around the world, it is also squeezing remittance flows with costly transfer fees. Read more on risk cooperative
Remittances are interesting because these flows are based on decisions by individuals and households, rather than firms or governments. It is a good additional indicator since it is motivated by considerations other than FDI or official flows including development aid. Remittances did not suffer a major collapse but clearly a slow down since the start of the Great Depression is also visible here. So also for this component of economic globalization we see a structural break. Read more in chapter 2
Read more 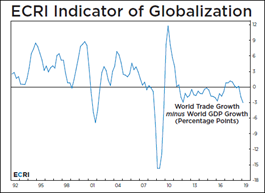