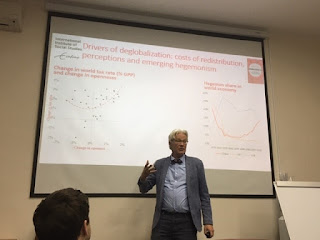 Ten years have passed after the Great Recession of 2008-2009, and a growing number of economists suggest that the new financial crisis may start next year. For the last years, most of the crisis predictors expected that it would start in Asia where a critical volume of bad debts had been accumulated. Then the focus of concerns shifted to US where the financial markets show some signs of overheating. US-China trade war and uncertainty around Brexit make the new global crisis even more possible. On the other hand, as Paul Samuelson noticed decades ago, markets had predicted “nine of the last five recessions”, and economists often see threats that fail to materialize. At the section, the following issues will be discussed: - Is it possible to predict financial crises and what indicators are the best to do it? - Does the global economy demonstrate any signs of the approaching crisis? What are the regions where it may start? - What would be the major differences between this crisis and one we passed in 2008-2009?