Showing posts from 2017
Show All

O Rourke on the trade collapses

"Two Great Trade Collapses: The Interwar Period & Great Recession Compared"   CEPR Discussion Paper No. DP12286 KEVIN O'ROURKE , University of Oxford Email: kevin.orourke@all-souls.ox.ac.uk In this paper, I offer some preliminary comparisons between the trade collapses of the Great Depression and Great Recession. The commodity composition of the two trade collapses was quite similar, but the latter collapse was much sharper due to the spread of manufacturing across the globe during the intervening period. The increasing importance of manufacturing also meant that the trade collapse was more geographically balanced in the later episode. Protectionism was much more severe during the 1930s than after 2008, and in the UK case at least helped to skew the direction of trade away from multilateralism and towards Empire. This had dangerous political consequences.
Post a comment
Read more

August 13, 2017
Are we on the brink of deglobalization? International organizations, such as IMF and OECD, point out that world trade is no longer performing its role as an engine of economic growth. They note the global trade slowdown that seems to end to the process of increasing openness that was a key characteristic of the halve century that preceded the world trade collapse in 2008/9.  Importantly the official forecasts of IMF and OECD are optimistic in the sense that they assume that the policy errors of the 1930s can be avoided, in particular the political twin-sins of isolationism and protectionism. Current developments are sobering. America is to be made great again, the (dis)United Kingdom will divorce itself from everything that smells like Brussels and on the European Continent self-congratulations on fending of extreme nationalist parties disable politicians to see the underlying problem. Yes we are on the brink of deglobalization
Post a comment
Read more

One is not enough! An economic history perspective on world trade collapses and deglobalization 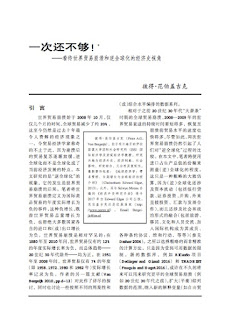 This article appeared  in the Chinese Edition of International Social Science Journal, Vol. 34, No. 1, pp. 17-30 This paper provides a comparative economic history  perspective on two significant periods of deglobalization: the Great Depression in the 1930s and the period following the Financial Crisis of 2008/9. The paper discusses differences and similarities and provides empirical results regarding the correlates of deglobalization, including the political system (institutions), level of development (GDP per capita) and the share of manufacturing The English version is here
Post a comment
Read more 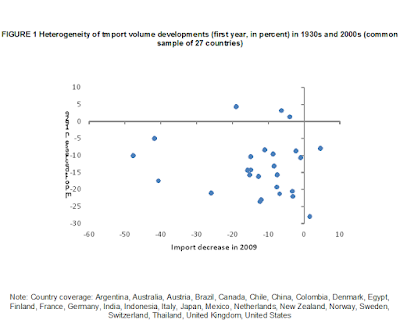 This paper analyses drivers of imports during the major world trade collapses of the Great Depression (1930s; 34 countries) and the Great Recession (2000s; 173 countries). The dependent variable is the peak to trough distance of the volume of imports in the first year and 3-year-period of these episodes, respectively. The paper develops a succinct empirical model that shows a significant impact of the peak to peak distance of GDP, the share of manufacturing goods in total imports and the political system. The 3-year-period distance for the volume of imports is significantly different for the 1930s and 2000s, but this is not the case for the 1st year of the two trade collapses. Importantly, the analysis uncovers significant heterogeneity with respect to regions. Pre-peer review version here van Bergeijk, Peter AG. "Heterogeneity and Geography of the World Trade Collapses of the 1930s and 2000s." Tijdschrift voor economische en sociale geografie (2017). DOI: 10.1111/tesg
Post a comment
Read more

January 08, 2017
Indeed, the current debate on value chains is inconclusive or needs at least more nuance Altomonte et al. (2012) note for France that along a global supply chain shocks as well as recoveries can be magnified due to ‘inventory’ effects (the so-called bullwhip effect) , Wagner and Gelübke (2014) conclude for Germany that the  hypothesis that foreign multinationals are more volatile following a negative shock is not supported by their empirical research, while Behrens et al. (2013) conclude that value chains played a minor role in Belgium (van den Berg and Jaarsma, this special section take an intermediate position for The Netherlands).. It is, however, not the inconclusiveness of the debate that is interesting: it is the heterogeneity of country experiences in Europe that suggests ample scope for finding out more about (regional) resilience. This is the answer to the question ‘Why do the global economic shocks affect regions and their recovery differently?’ that we seek to address. T
Post a comment
Read more
More posts
Visit profile